A Healthy Social Life is Good for Your Health

This article used with permission from Swedish Hospital. 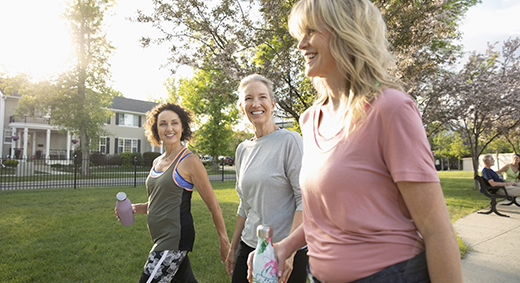 Recent reports show benefits emotionally, mentally and physically for people who spend time with others in nurturing friendships.

It's important for older adults to stay active socially for overall well-being.

Friends—it's not just a beloved '90s sitcom, but a strong predictor of good health. Social relationships have long been considered integral to a rich and vibrant life, and recent studies continue to reinforce that idea. Interaction with others—in person, not just on social media—can affect many areas of life for the better. Here are some great reasons for you to get out and join a book club, volunteer or catch up with a friend for coffee.

Being social helps us as we age.

Spending quality time with others can boost our physical and emotional health. A recent study from the University of Texas at Austin found that older adults who were more social reported more positive moods and engaged in more physical activity than people who spent time alone.

Friendships also benefit older adults' mental health. Researchers at the Cognitive Neurology and Alzheimer's Disease Center at Northwestern University Feinberg School of Medicine published a study that found that friendships were the common ground for people in their 80s whose brains functioned as if they were in their 50s or 60s, a group called "Super Agers."

In addition, a report published in Psychology and Aging said that social butterflies were generally more satisfied with their lives during their golden years.

Being social may help stave off disease.

Laughter may be the best medicine, but friendship could be a close second. A large and vibrant social network may be associated with a lower risk of type 2 diabetes, while people who don't go out socially very often may have a higher risk of developing prediabetes, according to a study from the Netherlands.

In other news coming out of Europe, an Irish study found that strong social connections may be helpful for preventing illnesses associated with aging. That research also mentioned the importance of volunteering, which allows people to socialize while coming together for the greater good. And a George Mason University study of postmenopausal women in the journal Menopause states that there is a relationship between having solid friendships and overall mortality. In other words, good friends can change your life.

Being social can keep you in shape.

If you've been going on solo runs, you may want to add a group fitness class to your workout routine. Researchers at the University of New England College of Osteopathic Medicine recently released a study that found group exercise program members reported less stress and felt stronger mentally, as well as physically, after working out together for an extended period of time.

Subscribe to the Swedish blog and you’ll never miss a health update.